Rare earths are a group of specialty metals critical to a wide range of modern technologies and future industries because most have unique beneficial properties. Rare earths are in high demand for permanent magnets used in electric vehicles, wind turbines, robotics, personal technology and other applications. ASM represents a new and significant source of rare earths that is independent of China.

ASM will produce a suite of separated rare earth oxides for up to 15 rare earth elements (including neodymium, praseodymium, terbium and dysprosium) in purities up to 5N (99.999%). A range of standard product specifications will be available, with exact chemistries and particle properties to be designed and tailored based on market demand. In addition to producing a standard product range, we can make products to customers' specifications under terms of the utmost confidentiality. Our operating demonstration plant at ANSTO (global experts in solvent extraction recovery of rare earths) enables us to produce small quantities of test material for customers.

A source of rare earths outside China

ASM represents a new and unique source of critical rare earths that is independent of the dominant Chinese market. We will produce significant volumes of 15 rare earths, including neodymium, praseodymium, terbium and dysprosium, which are in high demand for permanent magnets used in high-volume markets such as renewable energy, electric vehicles, personal technology and robotics.

At present, around 85% of world supply of these high-value rare earths originates from China, making the global rare earths market supply sensitive to changes in China’s manufacturing sector. New domestic policies, such as 'Made in China 2025', announced in March 2017, are expected to have the unintended consequence of restricting rest-of-world supply due to consumption by downstream Chinese manufacturers.

When supplied by ASM, manufacturers need no longer rely on China for the long-term supply of rare earths. Our products will be mined and recovered at our chemical plant near Dubbo in New South Wales, Australia. We will be one of few manufacturers outside China to supply a range of heavy rare earths (including terbium and dysprosium). Our rare earths concentrates will be separated into magnet rare earths (neodymium, praseodymium, dysprosium and terbium oxides) and other rare earths processed into an extensive range of downstream oxides and metals in conjunction with our strategic partners. ASM’s sustainable supply chain offers technology manufacturers transparency, reliability, product value and shorter lead times. 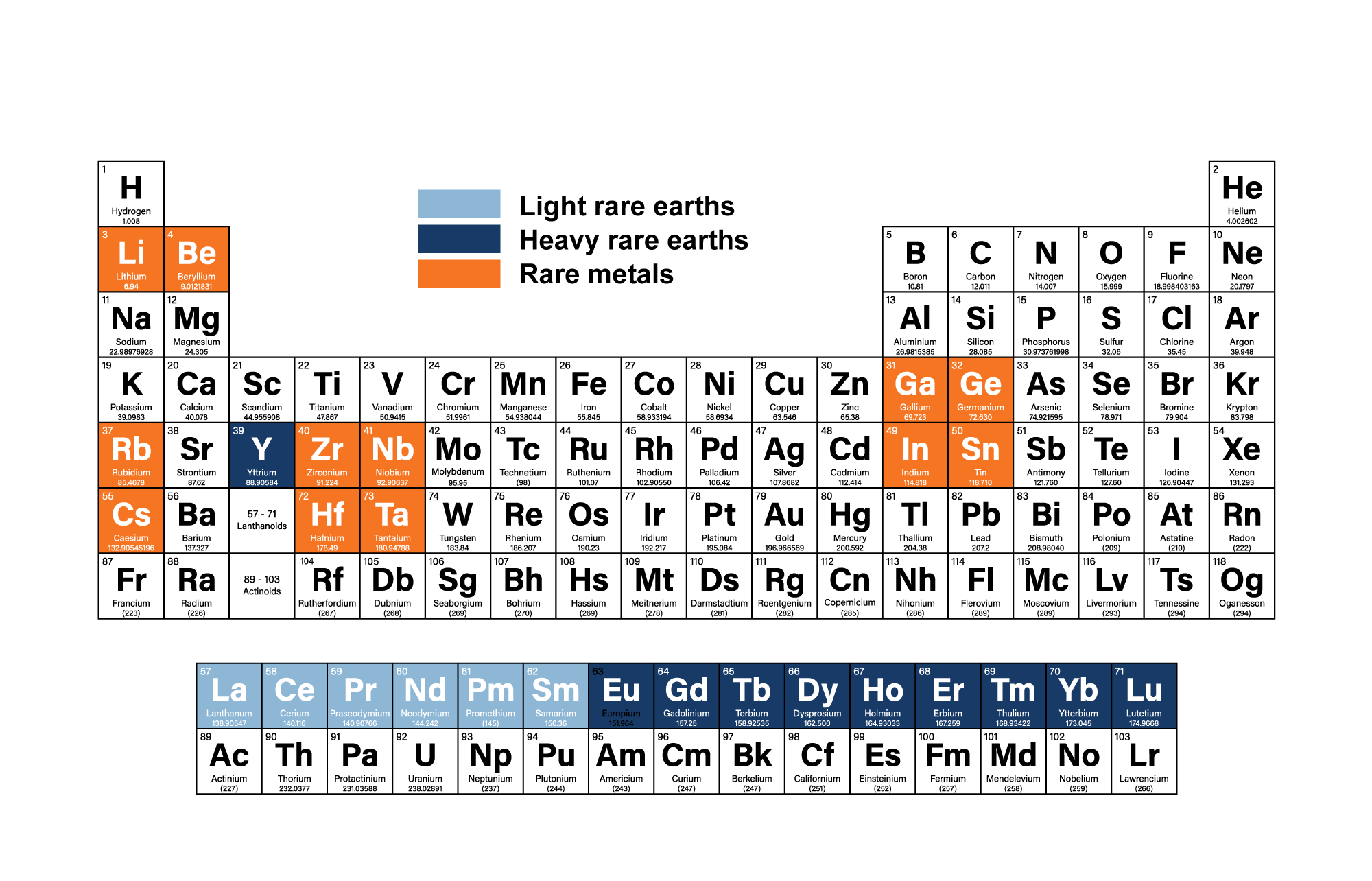 The rare earths are a set of 17 elements that share similar properties and are usually found together in geological deposits, requiring advanced metallurgical processing to recover and separate. They consist of the 15 lanthanide elements on the periodic table, along with scandium and yttrium. The most abundant rare earths are lanthanum, cerium and neodymium, all considered light rare earths, along with praseodymium and samarium. These elements typically comprise approximately 85-90% of rare earth resources. The heavy rare earth elements make up the balance and are significantly less abundant. These comprise europium, gadolinium, terbium, dysprosium, holmium, erbium, thulium, ytterbium, lutetium and yttrium.

Rare earths each have their own individual demand drivers, challenges and technology innovations. The key driver of the rare earths industry in recent decades is their application in permanent NdFeB magnets, where neodymium, praseodymium, dysprosium and terbium are used. Lanthanum, cerium and some of the other elements are widely used in applications such as catalysts, metallurgy, polishing, glass, ceramics and phosphors.

The key driver of the rare earths industry in recent decades is their application in permanent NdFeB magnets, for which neodymium is a key component. The additional presence of praseodymium contributes improved corrosion resistance with minimal reduction of magnet performance, while terbium and dysprosium each improve magnetic performance at high temperatures.

NdFeB magnets are essential for a growing number of applications involving electric motors, especially sustainable technologies and industries, where they are a vital component of wind turbine generators and electric vehicles. The high energy to weight ratio of NdFeB magnets has also facilitated the miniaturisation of computers, portable consumer electronics and smart devices. Other uses include medical imaging and diagnostic equipment, such as MRIs.

Rare earth magnets are a key component of magnetic resonance imaging (MRI); an average MRI machine contains 700kg of rare earth metals. Rare earths are also used in diagnosis and treatment of ailments including some cancers and rheumatoid arthritis.

The unique properties of rare earths are crucial for the latest fibre optic technologies that power the internet and telephone communications. They are also essential for a range of electronics, including computer components, global positioning systems (GPS), sonar, defence systems and lasers.