Rare earths: the bigger truth behind the US-China trade dispute

Mark Twain said ‘Never let the truth stand in the way of a good story’, according to a quick Google search¹. This may be good advice for novelists, but it’s bad news in every sense when journalists apply it. The truth about rare earths underlies the shiny story of the US-China trade dispute, which our media have lazily plucked off the surface. Anyone dependent on rare earths supply – i.e. everyone in developed countries ­­– needs to mine the deeper history and understand why the narrative will end badly for us if we don’t take immediate, well-informed action.

In 1992, Deng Xiaoping said ‘There is oil in the Middle East. There is rare earth in China.’ China’s rare earths industry began with mining and extraction and has extended to downstream manufacturing, due to the government’s Made in China 2025 policy. China has conquered more than 90% of the rare earths market, securing its dominance of high-tech industries.

How will China pay an environmental clean-up bill of US$30-40 billion, a result of decades of unsustainable rare earth mining? With current annual market value of US$3-4 billion, higher rare earth prices would cover this cost within ten years or so.

Chinese companies are moving fast to secure foreign sources of rare earths, investing in projects in Australia, Africa and elsewhere. The Chinese buy cheap raw materials abroad and capture most of the value at home. While China secures its rare earths supply and builds its manufacturing advantage, the rest of the world is depending on dwindling stock piles (2-3 years’ worth) and debating a trade dispute when we should be taking similar action. As China knows, to win the end game you must control your own supply for defence and economic security.

Even if the rest of the world leaps into action immediately, there will be a lag of up to a decade before new rare earths projects replace Chinese supply. Despite the urgency, other governments and private investors have postponed action (to China’s advantage) to ponder a question left unanswered by mainstream media: If global demand is rising fast, and six Chinese state-owned enterprises monopolise supply, why are rare earth prices still low?

I have previously outlined some of the big changes affecting the price of rare earths in recent years. Currently, China is deliberately keeping prices low to discourage investment by other nations in new rare earths projects, creating opportunity for Chinese companies and state-owned enterprises to fund them and exert control over foreign resources.

If their own governments and industries fail to invest, non-Chinese mining companies will turn to China for financing and offtake agreements. Other nations will consequently lose sovereignty over their resources as well as losing the greater processed value of their minerals.

The Chinese characters for crisis signify danger and opportunity⁵. It’s difficult for stakeholders outside the rare earths industry bubble to distinguish between truth and fiction, when superficial sound bites make front-page headlines and attract government attention. If they want to change the outcome of the narrative China is currently dictating, how do other governments and private investors distinguish between good rare earth projects and dodgy ones?

Avoid projects with Chinese shareholders or Chinese involvement in the supply chain. Seek projects in stable jurisdictions, with detailed engineering and proven end-to-end piloting. Look for firm offtake agreements, not just MOUs. Insist on sustainable energy and water use and waste and pollution management throughout product lifecycles, as well as ethical employment practices and constructive community relations. Understand that higher prices are the cost of making the world safe for future generations.

The resolution: a happy ending in 2.5 years’ time?

Independent of China, Alkane Resources is committed to sustainability and transparency. Our world-class Dubbo Project in NSW, Australia, has been comprehensively piloted over the past decade and has all government approvals in place. The project can supply rare earths and other essential elements for 80+ years and is ready for construction, which will take only 2.5 years from funding. 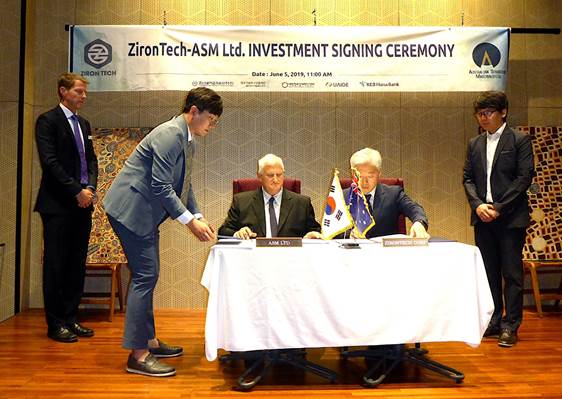 ASM is to invest in a new clean metal and high purity processing technology being developed in South Korea.

The technology converts metal oxides into metals through a carbon-free electrolytic process, with oxygen as a by-product, making it a cost-effective and environmentally superior alternative.

It has been proven to be applicable to zirconium, hafnium, and permanent magnet rare earths metals (neodymium, praseodymium, dysprosium and terbium).

These elements together represent over 80% of forecast revenue streams from ASM’s development-ready zirconium and rare earths project at Dubbo in central west New South Wales.

ASM is investing US$1.2 million towards a pilot plant facility to complete late-stage piloting and a feasibility study for larger-scale development and commercialisation of the process

In return ASM will have a 10 per cent interest in the developing company as well as exclusive rights to use the technology at commercial scale in relation to zirconium and hafnium.

ASM’s agreement is with a South Korean company, Zirconium Technology Corporation, with the research having been developed by scientists at Chungnam National University’s Department of Materials Science and Engineering in Daejeon.

The technology has the potential to replace the Kroll process, a highly energy-intensive process that has been used broadly in the industry since its development in the 1940s, with a more environmentally sustainable process which, when commercialised, is estimated to reduce metallisation costs by in excess of 50%.

ASM considers this investment in downstream processing will improve the economics of its Dubbo project as well as giving it involvement in the wider commercialisation of a breakthrough technology.

The pilot plant is expected to run throughout 2019 and 2020, putting ASM in a position in 2020 to make a final investment decision about wider investment in commercialisation.